Kleen Sky Distribution LLC focuses on bringing environmentally friendly and market disruptive products to customers. What do we mean by "disruptive"? Products so revolutionary, they go far beyond advancing upon an existing idea - they disrupt that idea and that market entirely, taking products onto paths never before imagined. Read about it in Forbes!

Odorox® is a disruptive product and Kleen Sky LLC is the nation's premiere source.

At Kleen Sky, we are driven to do the right thing for the environment and our dealers and customers by breaking the status quo. We go far beyond your normal "just order from us and you are on your own" wholesale distributor. We offer all of our dealerships not only great pricing on all of our ground breaking Odorox® products, we promise exclusivity and support, assuring product availability and profits on products sold. What does that mean to you? We will help you stay ahead of your competitors. Isn't that "Klearly" better?

The Odorox MDU-RX has been proven by independent labs to eliminate the Covid-19 virus from environments both on surfaces and in the air. Below are links to the lab results as well as the manufacturer’s press release.

We maintain a stock of Boss™ and Boss XL3™ units which are ready for immediate delivery for use in restoration projects.

Call NOW for program details, availability and delivery/shipping estimates.  We have replacement parts available as well. 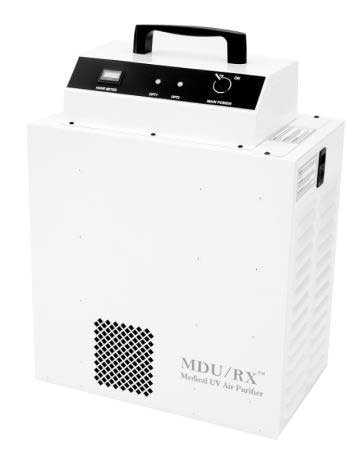 Odorox® Technology is the perfect solution for any commercial fire and water cleanup.

What is a Hydroxyl?

Mother Nature uses hydroxyl molecules to cleanse and decontaminate our outdoor environment. However, hydroxyls do not occur indoors, so HGI developed a patented process, through years of field testing, and created a solution that mimics Mother Nature by safely generating molecules that naturally "seek and destroy" odor molecules, bacteria, viruses, VOCs, and other chemicals. Hydroxyls actually neutralize odor molecules and gasses by breaking down their chemical bonds. This can be done with even some of the most difficult molecules, such as hydrogen sulfide (H2S) and ammonia (NH3).

Hydroxyls (HO•) are naturally occurring molecules. They are created in our atmosphere when the sun's ultraviolet rays react with water vapor in the air. Hydroxyls are an important agent that scrub and cleanse our planet's environment.

2. The hydroxyl (HO•) molecules exit the chamber to decontaminate surfaces and contents.

Contaminated air is directed into the chamber where ambient humidity and multiple nanometer wavelengths and frequencies combine to create an oxidizing formula and produce hydroxyls.

The quartz crystal optics are finely tuned to deodorize air flow, eradicate bacteria and other micro-organisms, as well as produce hydroxyl molecules.

The purified air is recycled back into the environment along with hydroxyls to further decontaminate surfaces & contents.

Once the hydroxyls are created, they are sent to "seek and destroy" odor molecules, bacteria, viruses, mold, VOCs and other chemicals. The hydroxyls simultaneously decontaminate the air, surfaces, and objects.

This system does not require all of the contaminants within a room to pass through the processing chamber, which guarantees a more effective and rapid decontamination.

Outside the unit the hydroxyls immediately begin a cascade reaction in the air, thus creating even more hydroxyls. The cascade of hydroxyls quickly disperse throughout the air and penetrates surfaces and objects.

Any quenched hydroxyls are continuously replaced by the system, providing a constant flow of hydroxyls. ODOROX® hydroxyl generators produce atmospheric hydroxyls that circulate throughout the air and reach places that otherwise can’t be reached. Other UV technologies only clean the air that passes over the UV bulbs (about 20% of the air in a room).

ODOROX® hydroxyl generating systems are a green technology, and the industry's most advanced solution for eliminating odors, purifying the air, and decontaminating surfaces and contents. Odorox® systems are scientifically confirmed, field proven, and disruptive to all conventional deodorization and cleaning technologies.

Hydroxyls (OH) are safe, naturally occurring molecules that are created in our atmosphere when the sun’s ultraviolet rays react with water vapor. They play a critical role in cleaning the earth's atmos0phere and are often referred to as the "detergent" of the atmosphere. They can be used to kill bacteria, viruses and mold, and to break down volatile organic compounds (VOCs), chemical fumes, gases, vapors and unpleasant odors. Through the use of patented UV technology, Odorox® replicates the natural production of hydroxyls to eliminate biological and chemical contaminants.

The Odorox® technology is safe, effective, efficient, and very easy to use. This revolutionary technology is the environmentally friendly way to handle the most complex or simple deodorization and cleaning tasks. Odorox® eliminates malodors and pathogens and does not “mask” them.

If you want to try the product before you buy or if you have a situation that needs cleaning, we offer unit rentals.  Please call for details and availability.

Rental fee does not include delivery and credit card must be provided as security deposit for unit prior to rental.